A History – An excerpt from the 1999 Stillaguamish Country Club 75th Anniversary Book.

While Mother Nature gets the lion’s share of the credit for the beauty and shape of our story’s location, man in his own fumbling and probing way, must be credited for an assistant. He built the railroad and cut the trees, but if he destroyed the work of nature, he created the opportunity for the development of a sportsman’s paradise.

Shortly after, man realized the value of the Stillaguamish Valley timber. The Northwest Pacific Railway pushed its tracks east of Arlington. By 1901, the first train reached Darrington. One of the obstacles it had to overcome was the big bend of the Stilly, eight miles east of Oso. It was decided to divert the river by blocking off both ends of the bend. A rockfill accomplished this and the river assumed a gradual bend. The old river bend, due to the fill on the lower end, remained fill and became the lake known today as Blue Pond.

Prior to World War I, the Sultan River and Timber Company logged off the area around French Creek on both sides of the Arlington-Darrington Road. The section bordering Blue Pond had been logged off ten years prior while the railroad was building its line.

Cicero, Trafton, Oso, Hazel and Fortson all boasted of booming lumber mills – each contested the others’ claim to superiority. Each had its share of wild and drunken Saturday night brawls, but none was wilder than Darrington. Otto Thorkeson, who operated a store at Hazel, tells of being able to spot at least a dozen stills on the hills around Darrington.

This was the picture when Burt Kirkland left the U.S. Forestry Service as superintendent of Snoqualmie National Forest in 1912. He took a position with the University of Washington in the forestry department. After the war was over, he bought up a tract of logged-off land with the idea of raising cattle and having a dairy farm. He imported the best white-faced cows he could get from Nebraska. He had the idea all he had to do was turn them loose and they would take care of themselves. However, the logged-off land wouldn’t support them. It would be years before grazing would be successful. One of his men, noting the starved look of the cattle, bought grain for feed, thereby incurring the wrath of his employer.

But if Burt Kirkland failed in the cattle business, he had other ideas for the area. Instead of a logged-off stump farm, he envisioned a country club – a place where tired businessmen could spend their weekends relaxing at a game of golf, tennis, swimming, and fishing. The latter was already available, even in the early twenties, as the Stilly was one of the best fishing waters in the whole state. 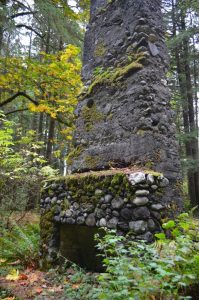 On the lookout for more information about the history of the Stillaguamish Valley, check out these links below.