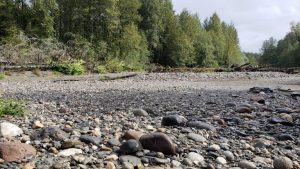 What is the ‘Stilly’?

The Stillaguamish Country Club was established in 1924 as a not for profit  corporation and currently consists of approximately 95 acres located on Hwy 530,  between Arlington and Darrington. The north fork of the Stillaguamish River is on  one boundary and both French Creek and a Snohomish County Rails to Trails  conversion trail bisect the Club.

The Club was created primarily for recreational and relaxation purposes. Roughly  half of the property is undeveloped forest land and the other half is divided into lots  and assigned to members. Much of the forested space is classified as “Open  Space” under Washington State law, for tax purposes and preservation. The real  property not assigned to lots is commonly referred to as “community property” and  available for all members’ recreational use. There are no man-made amenities,  such as a clubhouse, swimming pool, golf course or restaurant on the grounds.

Club membership is limited to 63 members and is available to either an individual  or a married couple. Members do not own the land underneath their cabins. With  the exception of about a dozen permanent residents, members use their places for  retreat and recreation. Members pay yearly dues which cover such things as  property taxes on all the land and the caretaker’s house, the caretaker’s salary  and insurance. Members pay personal property taxes on their own cabin and  improvements.

The Club provides minimal services. A resident caretaker lives on the premises in  a house owned by the corporation. The gate at the entrance to the Club requires  an access code to enter. Gravel roads and a small bridge are maintained by the  Club.

As a private members-only organization, purchasing a cabin from an outgoing  member is contingent upon being accepted for membership in the Club. This  requires an application, sponsorship by two current members in good standing  and an interview/approval process with a Membership Committee and the Board  of Trustees.

The application process helps prospective members understand the nature-based  orientation of the Club (not a typical “country club”) and to realize that there are  expectations of participation , (e.g. Board service, attending an annual meeting  and the annual Work Day) plus rules and restrictions to this type of living situation  that might not be encountered in private property ownership. There is a  nonrefundable application fee and a refundable membership deposit. The  membership deposit fund is kept separate from the operating funds. The Club  operates with a balanced budget.

The Articles of Incorporation for the SCC are on file with the Washington State  Secretary of State. Rules of the Club include the SCC Bylaws, Standing Rules and  Ground Rules and a Rate Schedule of Fees, Fines, and Interest Rates, some of  which are available on our Documents page. An elected nine member Board of  Trustees conducts administrative business for the corporation.